Portland Reclaiming brought a “hope” banner to the M15 march. We also brought fabric and pens for people to make their own peace flags in the theme of “hope” and marched with over a hundred in a long tail behind the banner. 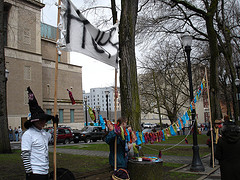 Additionally, we got many, many anonymous pictures taken of us and might appear on the TV too, as part of the march. And, I had someone from KBOO interview me briefly.

A picture of Portland Reclaiming by someone else: 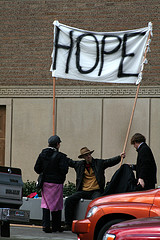 I regret that I did not get pictures of the March Fourth Marching Band, but I will be seeing them in my dreams …

Here’s a video of the march. The “hope” banner starts going by around 0:15 and the peace flag tail continues until around 1:25. That was pretty early on, just after the start because we were still in front. That was before we slowed up in order to fall back toward The March Forth Marching Band, so we could listen: