I picked up Shibumi by Trevanian, pen name of the late Rodney William Whitaker, because it appears on screen in John Wick 2, and I was curious. I felt I found some inspirations from the book, but the two are very different.

For the first tenth of this book, I was increasingly righteously pissed off at how shitty it was: poorly written with massive continuity errors; and misogynistic, sexist, racist, prejudiced, semi-literate MRA wet-dream drek. I almost threw this book across the room into the trash. I tried to excuse it because the book was published in 1978, but that didn’t excuse narrative that seemed more a backward drop into the 40s or 50s. But then I realized something. I was reading satire. This isn’t an early James Bond novel. This is Our Man Flint. Partly. It turns into an oblique philosophical treatise, for the most part. At least, once I got over the expectation, the rest started to come into focus.

In fact, this is not at all a spy thriller as it seems to be billed in the promotional copy. There’s damned little spying, and what action around spying there is in this is drawn lightly on paper thin pages. This is a character study in contrasts, a kind of episodic explanation by what seems to be the author’s notion of an ideal man in conflict with a less than ideal world. There’s also a fair amount of resentment and vitriol about the world that seems very much like the author taking the opportunity to vent hardened personal feelings about life experiences not directly biographically detailed here.

In the front matter, the author writes with dry humor that “[a]ll other characters and organizations in this book lack any basis in reality—although some of them do not realize that.” And, there’s an early moment where the author reveals he’s completely self-aware of the tone: “He was out of patience with this fool, who was more a broad ethnic joke than a human being.” The thing is almost all of the characters in the first tenth are broad jokes. These remembered two hints allowed me to re-appraise the first tenth of the book, and I came to terms with most of my early criticism, even that the novel was poorly written. The most egregious continuity error was eventually explained, though not all were resolved.

This is the last book in the saga of Nicholai Hel by the original author, and my first read of any book by Trevanian. An earlier book in the series, The Eiger Sanction, was made into a movie, which I really don’t remember, though I’m sure I’d seen it; and besides, apparently, the author felt it was crap anyway. Trevanian makes several comments about Hollywood in the text and about the movie in footnotes which demonstrate the bad feelings he had for the experience of being adapted to the silver screen.

Nicholai Hel is without a doubt an ubermensch mary-sue, not, frankly, too unlike John Wick, to be honest, and, perhaps, an attempt by the author to paint his own idealized self-portrait. Like Hel’s companion Beñat Le Cagot is a fictional persona adopted by the fictional character. It’s really all onion peelings though when one realizes that the author Whitaker published “translations” of “Le Cagot” stories. Perhaps the foolish characters weren’t the only broad strokes to be found, eh?

“From that moment, Nicholai’s primary goal in life was to become a man of shibumi; a personality of overwhelming calm. It was a vocation open to him while, for reasons of breeding, education, and temperament, most vocations were closed. In pursuit of shibumi he could excel invisibly, without attracting the attention and vengeance of the tyrannical masses.”

And, of course, the way to “excel invisibly, without attracting the attention and vengeance of the tyrannical masses” is to become an infamous international assassin. What. What? Yeah, okay. Turns out it’s just the day job that paid for the semi-retirement-that-can’t-last. Turns out you can’t actually take the mary-sue out of the Great Game without blowback. Oops. Who knew?

In fact, I find Nicolai and Han reminding me a lot, in a general way, of the characters Colin Campbell and Gwendolyn Novak in Robert Heinlein’s later The Cat Who Walk Through Walls.

The thing is, even in contrast to the buffoonery of the antagonists, Hel is still a white German (even his mother’s family history in Russia is excused by her being pure unmiscegenated Habsburg) ubermensch of lofty breeding. There’s a definitely a strong case played out of eugenic superiority here, even if canonically Nazi notions are dismissed, by way of making Hel’s actually Nazi German father a kind of simple idiot sperm-donor. Ultimately this is not so much a contrast the the broad jokes, but rather an attempt to retell those jokes in a serious way. That attempt to seriously detail Hel’s mary-sue eugenic superiority, especially as a white person in Asia excellent at culturally specific tasks, mundane and mystic, became for me strikingly uncomfortable to read in a “white saviour” way.

As the framing story proceeds, almost as an afterthought, or as just enough excuse to tell the rest, the meat of the first half of the book is all biographical flashbacks offering insights into the life and character of Nicholai Hel. The story is travelling through time, catching up to the framing story eventually. Its an interesting mechanism, and lends to the dreamy lofty philosophical stance the is the primary payload delivered by the sneaky conceit of the framing story.

So, not at all a spy thriller. This is a kind of narrative manifesto about what the author feels a superior man is and does and thinks, especially in parallax.

I want to note that while I criticized the writing, the truth is more complex. There is a simplicity to the language which should make this novel very approachable for anyone, there is a technical depth of knowledge within that informs that approachability, and there is occasionally surprisingly erudite language. I ended up at the end feeling oddly ambivalent about the writing.

Many things about this book are both strong and weak. It’s good but not great. It’s interesting but also frustrating. I’m glad I read it, enjoyed a lot of it along with a large number of passages I found myself considering as highlight-worthy, but I have a hard time recommending it fully. Maybe if I’d read some of the earlier novels first, I’d have been less put off by the first tenth, but I feel I’d still be uncomfortable with some things I’ve mentioned that are essential throughout. I just can’t completely divorce the philosophical intrigue from the philosophical flaws. It’s a journey, though. So, take it for what it is in whole, if you’re interested.

After finishing Shibumi, I am less than interested beyond idle curiosity to check out the previous installments in Hel’s saga, and, that’s okay: I’ve no doubt I’d just find this installment the most interesting of the bunch anyway. I find I’m far more interested in the author Whitaker as a person. I’m likely to pick up his autobiographical The Crazyladies of Pearl Street, and am definitely curious about his forthcoming magnum opus, posthumously finished by his eldest daughter, Street of Four Winds. 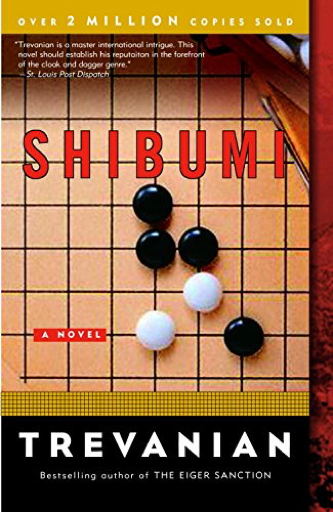