Starship Grifters by Robert Kroese is the first book in the Rex Nihilo Adventures series, but the 3rd volume I’ve read in this universe.

The first volume I read was the short The Chicolini Incident, featuring Rex Nihilo and Sasha, which I understand is included in the third book in the series, a prequel, Book 0, Out of the Soylent Planet. I enjoyed it enough to read this next book in the series.

In spite of the name of the series, I wouldn’t actually say Rex Nihilo is the main character. The story is told from the viewpoint of Sasha, Rex’s robot sidekick. Rex Nihilo is basically an awful person who is more an antagonistic Murphy’s Law force of nature which beleaguers the life of the well-intentioned robot Sasha. This relationship is not at all unlike Zapp Brannigan and Kif Kroker from Futurama. Rex Nihilo also reminded me, for several reasons, of Harry Harrison’s Bill the Galactic Hero.

I’m kinda pissed that by the very end of the novel I had been tricked into being sympathetic to Rex, because he’s really a total shit, but it was a good twist. I’ve had more than enough of people like him. I’m really just over it, even for humour factor. But, when taken as an antagonist within the story, Rex is certainly easy to hate.

But other than Rex’s constantly creeping ick factor while falling trippingly into success after success in spite of himself, usually being saved by other characters trying to survive the situations Rex creates, the story is amusing, and in places laugh-out-loud funny. There’s a lot of scifi in-jokes, especially at the expense of Star Wars. I guessed some twists way early, but others were well and truly surprising.

I read this synced to the audiobook, and both are well done. The one criticism I have for the audiobook is that the portrayal of Rex’s voice never quite seemed right to me. Maybe it’s an expectation from Zap Brannigan being obliviously boisterous, but for the audiobook Rex has a kind of gravelly voice that sounds like a smarmy Mark Twain to me, and doesn’t quite match the character in the story, or the image on the cover for that matter, to me.

I’m slightly ambivalent about reading more in the series, though it’s good enough. And, I’ve already got the next two books, so I’ll probably get around to them eventually. I find I’d be much more interested in Pepper Melange and Sasha teaming up, but realistically they’d be unstoppable; and Rex is a walking talking crisis creation device, so … Yeah, I just don’t really want to read about Rex anymore, but I might anyway for the rest of it. 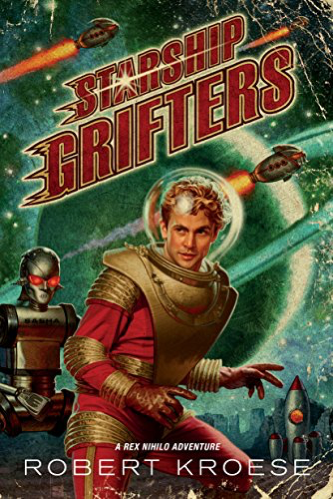