Back in Nov ’07, I got to see Matt Haimovitz play with members of the Portland Cello Project in the music section of a book shop in downtown Portland. I wrote about that after seeing the show. The space was simply packed with people, wall to wall. It was definitely interesting.

Looks like Haimovitz is back in town, and a few other local cello players will be opening, at the Doug Fir on Jan 21st at 9pm. (There’s little bit of confusion because the Doug Fir ticket info says 9pm, but an email I got suggested that some of the cellists might start playing around 8:30pm, but I’m going to go with Doug Fir’s statement of time.) 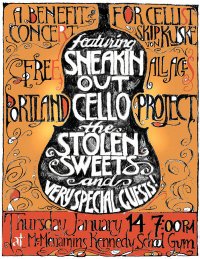 Okay, this sounds wild. Local musician Ben Darwish [also] is playing with a 10-piece band at The Goodfoot on Sat, Dec 26th at 9pm. The music will be an tribute to Michael Jackson in the style of afrobeat!

Put on your dancing shoes for an Afrobeat concert inspired by Michael Jackson’s music. Innovative Portland-based composer Ben Darwish will lead a ten-piece band as they interpret Jackson’s songs using Afrobeat techniques popularized by Fela Kuti. The band features members of Commotion, with Tahirah Memory and Gretchen Mitchell on vocals, and master African drummer Neindow Mashud, who frequently performs with Obo Addy. Don’t stop till you get enough! $10.

Performing will be original members of Parliament Funkadelic and DJ’s Dr. Adam & Evil One.

Walking Home will be playing with other bands on Fri, Dec 18th at Red & Black Cafe as a benefit for Gender Free For All

Anna and Sami are home, after our six-week tour with the Portland Cello Project, and we’re excited to announce our first performance back in town. We’ll be playing at the Red and Black Cafe this Friday as part of the Gender Free For All fundraiser. The event begins at 6 pm, and we’ll be the last of four musical acts, so we’ll go on around 9. Also featured will be Nicole Sangsuree, Felecia and the Dinosaur, and Lindsey Walker.

Here’s a little more about the organization we’ll be supporting:

Gender Free For All (GFFA) is an organization that works to defend the right of every individual to identify however they desire, visibly and proudly, whether it’s male, female, other, somewhere in-between, none at all – whether a person varies in their gender identity from moment to moment or if they’ve known how they identified since birth. They hold a march and rally annually in August (formerly the Trans March) and worked with the City of Portland and Multnomah County to establish August 1st-7th, 2009 as the first Transgender Awareness Week! For more about GFFA: http://gffapdx.com/

And here are all the details for the show:

Mark Growden will be at Mississippi Studios on Sun, Nov 22nd at 8pm with 3 Leg Torso.

Anomie Belle is back in town on the 29th at Doug Fir:

Bogville part III is coming up. All ages, as long as by all you mean not under 18, apparently.

FRIDAY the 13th of November
and
SATURDAY the 14th of November
$10 in advance $15 at the Door
Tickets available online at https://www.brownpapertickets.com/event/82888
Doors at 8pm performance at 9pm SHARP

BOGVILLE:
Chapter III
Eye of Retribution
In which Evil is Subsumed by the Seeds it has Sown

at THE LOTUS SEED Church
4635 NE 9th Ave
NOTE: No one under 18 years old will be admitted. 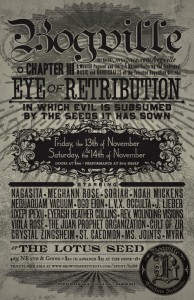 Can Can Presents is excited to announce the return of its Vegas-style floor show, Viva Oz Vegas. For the first time in its three year history, Viva Oz Vegas is hitting the road — with performances in its native Seattle, as well as Portland, Olympia, Spokane and Port Townsend, this October.

Follow along as the yellow brick road leads Dorothy into the temptations of Sin City, where her encounters find her replacing the long-time starring lady at Casino Oz — the Wicked Witch of the Breast. Marvel as other familiar characters get not-so-familiar makeovers. Thrill to an evening full of nostalgic music, Las Vegas-style showgirls, aerial and floor acrobatics, comedy, game show glitz, and a full deck of surprises you won’t soon forget. www.vivaozvegas.com

Mission of Burma [also] is back at Doug Fir Lounge on Nov 10th at 9pm:

Noticed that Poi Dog Pondering will be at Doug Fir Lounge on Sat, Dec 5th at 9pm:

Got an email that Scotland Yard Gospel Choir was in an auto accident and won’t be playing.

On the other hand, if you’re interested in Poi Dog Pondering, there’s a bunch of info on their web site including interesting warnings on their press kit to journalists:

“If you think we have defined you, then stop here and make some shit up, It will be far more interesting for everyone.”

Leela and Ellie Grace will be doing a local show before heading off to the wilds of Canada. They’ll be at Artichoke Music on Oct 10th.

This will be Leela and Ellie’s first full evening concert in Portland since Leela moved here over 2 years ago. Don’t miss this rare opportunity. Come help the sisters kick off their 2-week Canadian concert tour!

A big gathering for a tiny suggested price, on Fri Oct 2nd at 9pm over at the Circadia Arts Center:

::PDX::
sleeping with the earth
(http://www.myspace.com/swte)
cult of zir
(http://cultofzir.com) 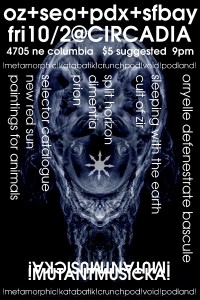 So, I don’t know a lot about this group, except that I got the website from someone in the group; and from listening to the tracks on their website. It’s not exactly metal, but it’s kinda hard-folk … oh, except for the track that just started to play now, yep, that’s the cookie monster metal voice, yep; and they’re kinda workin’ on ritualizing their performances. The vocals on a few tracks remind me of Amy Denio, which is surprisingly cool; and I find myself thinking about the Lithuanian hard-folk group Kulgrinda. Anyhow check out Aranya [also] on Thursday, Oct 29th at the Circadia Arts Center with Black Budget and another group not yet announced. It’ll be at 10pm.

So, there’s this thing going on. Abney Park, the steampunk group will be there, along with a bunch of other names, including Soriah, Bogville Creature Features, and more. It’s two days filled with live music, ritual theatre, gothic fusion bellydance, butoh, art show, fashion show, dance party goodness. Er, or, filled with dark darkness and so on. 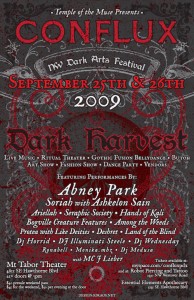 Monsters of Folk will be at Arlene Schnitzer Concert Hall on Wed, Oct 14th at 8pm. Gander at the event at the PCPA site. Tickets are out of the price range I’m willing to pay, generally, but maybe you’re into that. (But, you know, at least buy from the PCPA box office not that ticket monopoly, if you do go.)

Zony Mash used to host their zonymash.com website with one of the ISPs I worked at. Yeah, trivia! But, more importantly, I’m clearly connected to greatness, don’t y’know?

Zony Mash will be playing with a horn section at Mississippi Studios on Sat, Sep 26th at 9pm.

You only really need to know two things about this show, and both are sufficient in and of themselves: Wayne Horvitz & Skerik. There’s other people involved too, and they’re all great, of course; I don’t mean to say otherwise.

But, Zony Mash is special. That’s what I’m saying. And, this show is even more special than that because of the addition of horns.

They’re also playing in Seattle on wednesday and in Olympia on friday. Everyone should go!

Here’s some pictures of Zony Mash Plus Horns playing in Amsterdam back in May: Wayne Horvitz Zony Mash & Horns – zondag 31 mei 2009, Bimhuis, Amsterdam. I like this one, especially.